All the latest news, events and activities at AAA 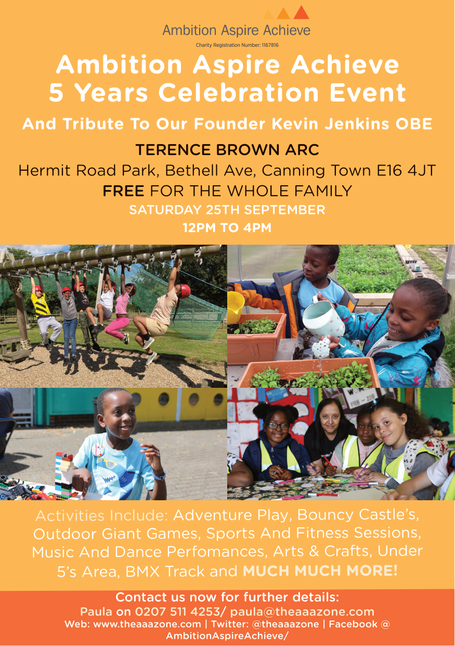 We'll be celebrating this milestone and the remarkable life of Kevin Jenkins OBE with a fun filled day FREE for all the family!

Activities include adventure play, bouncy castle's, arts and crafts, BMX track, under 5's area and MUCH MUCH MORE! Plus sports and fitness sessions and music and dance entertainment throughout the day.

Join us on Saturday 25th September from 12pm to 4pm.

The family of our founder Kevin Jenkins OBE would like to express their thanks for the support they received since Kevin passed away last week.

"We want to thank people for their well wishes, cards and flowers and would like to say how thankful we are for their kind words during this difficult time"
Paula, Emma, Katy, Ben, Lucy and all the family

With the latest government announcement surrounding COVID-19 restrictions, some of our clubs and activities have been suspended during the lockdown period, in particular our weekly Wednesday youth club at the Arc and activities based at Abbey Hub. Our services at the Arc supporting children and young people with additional needs remain open, to ensure those most in need continue to receive support. Visit our What's On page to find out more about the projects and activities we are delivering. We expect to re-open all provision as soon as lockdown restrictions have been lifted.

Following the latest government advice surrounding the current situation with the Coronavirus/COVID-19, we have made the difficult decision to suspend clubs, activities and open access provision at both the Terence Brown Arc in the Park and the Glyn Hopkin Abbey Hub for the time being. We remain committed to opening up our services again as soon as possible and also providing any help to the children, young people and families we work with where we can.  We can be contacted via email or phone - please do feel free to get in touch with Jonny jonny@theaaazone.com 07957620462 or Paula paula@theaaazone.com 07432 024002. In the meantime, we hope that you and your loved ones are in good health and we look forward to welcoming all our service users and families back when our centres re-open. Take care and stay safe.